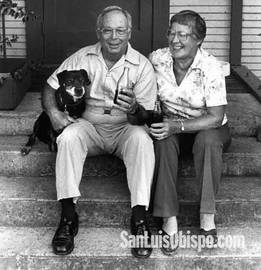 ​Wilmar and Henrietta Tognazzini with dog Stud sipping bottles of homemade root beer, from a story published November 13, 1987. Tribune file photo.
San Luis Obispo Tribune Article
(copied below but click here for link to original on SanLuisObispo.com)
​
by David Middlecamp - dmiddlecamp@thetribunenews.com  - October 22, 2013:
"Photos From the Vault" owes a debt of gratitude to clippings compiled by Wilmar Tognazzini. For 15 years he researched and wrote the "100 Years Ago" column that ran in the then-Telegram-Tribune. The educator and historian died last weekend at the age of 95.

​It was 120 years ago this July that a tent was pitched at Higuera and Nipomo streets in San Luis Obispo and a "... great celebrity for many years in the East, and all over the world in fact ..." set up performances. Yes, Jo-Jo the dog-faced boy was in town.

I know this factoid because Wilmar "Tog" Tognazzini wrote about it in his "100 Years Ago" column on July 14, 1990, in what was then the Telegram-Tribune.

For 15 years, Tog faithfully wrote weekly about life in San Luis Obispo from 1888 through 1903, making him perhaps the best living historian for that period of time. Tog's 16-volume compilations can be found at the San Luis Obispo City/County Library.

It's little wonder Tog was designated a "living treasure" by the Morro Bay Chamber of Commerce in 2000, as well as a "national treasure" by San Diego Union reporter Mark Sauer in 1986. (It's a story of family, patriotism and a battle against bureaucracy that can be accessed [...posted below].

But among all the accomplishments Tog can rightly feel most proud of, the San Bernardo Creek resident has to regard his recent wedding anniversary to wife Henrietta as his finest achievement.

You see, the Tognazzinis have been an item for the past 70 years, having met in Greenfield in 1937 and then marrying there Dec. 26, 1939, which makes them legitimately platinum — rare and precious.

Tog struck gold in finding Henrietta Brown. As lovely then as now with an easy and beautiful smile, she's a Paso Robles native, the great-granddaughter of Bernard Exline, who homesteaded land north of town.

Youngest daughter Anne believes her parents have forged such a remarkable union because they "have been absolutely unwavering in their commitment to being married."
A cynic might scoff at such a simple maxim. But in light of high divorce rates today as opposed to our parents' and grandparents' generations, it's an uncomplicated truism for Tog and Henrietta: They've believed in working things out, not cutting and running in the face of adversity, hardship or even tragedy.

And tragedy has been a part of the Tognazzinis' troth.

Parents of 10 children, they lost two of their sons (Dale as a young child and Henry as a newborn) in the early 1950s. The remaining eight are Jane, Alan, Susan, Noel, Mark, Mary, Todd and Anne... (They also have 18 grandchildren and nine great-grandchildren.)
Aside from having long-living genes and a commitment to marriage, there are other more intangible factors that come into play to be mated with someone for 70 years.

To those who know Tog and Henrietta, those qualities include a love of humor and fun (he makes a mean batch of home-brewed root beer for a continuous source of floats), deep respect for each other and an insatiable curiosity about the past, present and future. It means they listen carefully to each other and cherish one another without stipulation or expectation.
But there is more to the tapestry they've woven together. Tog and Henrietta entwined themselves as much with each other over the years as they have with the community they love so much, Morro Bay.

Starting in 1944, Tog was a teacher, principal and superintendent of Morro Bay schools before their unification with San Luis Coastal. It was on his watch and under his direction that Del Mar Elementary was built.

For her part, Henrietta not only kept the brood in line but also helped run the couple's San Luis business, Tog's Party Shop on Higuera. And, being a baritone sax player, she was an original member of the Morro Bay White Caps Band and served as the first woman president of the San Luis Obispo County Band. Those are just the high points.

What Tog and Henrietta have achieved is rare, a phenomenon really: A heart-to-heart match that, like all things vintage, has aged only better over time.

Congrats, you two. We'll chat again at your 80th.

​The Statue of Liberty actually turns 100 this month, but we celebrated on the Fourth of July. Time magazine called it "the party of the century!"

What short memories we have. And how we love to indulge in patriotic hype these days. is my idea of a national treasure, an authentic piece of work. Actually, he is a work in progress, still curious about life's offerings even though he is well past retirement age.

Tog and I became pen pals 10 years ago -- you remember, 1976, the Bicentennial Year, when another wave of patriotism washed over the nation.

It got pretty embarrassing at times, what with red, white and blue toilet seats and dogs saluting Bicentennial fire hydrants.

But a few people like Tog managed to put it all into perspective by celebrating quietly, with dignity, restraint, ingenuity.

Wilmar Tognazzini is a retired superintendent of schools who lives with his wife, Henrietta, on a lovely stream outside Morro Bay. It was extraordinary that we came to know each other since I lived 2,500 miles away in Lansing, Mich.

Tog, who took the job as director of tours at the Hearst Castle, had a big problem in 1976.

President Gerald Ford had said the tall ships and ticker-tape parades were fine. But he urged Americans to find a personal Bicentennial project to commemorate 200 years of independence.

Tog took the president's urging to heart and his idea was terrific:

Each state had issued a special Bicentennial stamp. Tog wanted to have all 50 state stamps canceled by the post offices in the state capitals on July 4, 1976. Then he would present a set of the stamps to each of his eight children.

There was nothing illegal about it. Indeed, when he sent his packages of eight stamps to capital-city postmasters, in May, many obliged him early and sent notes congratulating Tog on his idea.

He wound up with eight sets of 49 Bicentennial stamps canceled in 49 state capitals on July 4, 1976. You guessed it -- the Lansing postmaster balked.

She was a tough old bureaucrat who refused to see Tog's project for what it was. She insisted he was trying to manufacture a rare and valuable stamp collection and she utterly refused to be a party to it.

It was easy to thwart the plan by simply letting Tog's stamps languish until July 4 had come and gone. Then she hid behind the federal law that prohibits postmasters from postdating stamps.

He traveled to Washington and tried to see the postmaster general. Failing that, he told his tale to any postal bureaucrats who would listen (and many who wouldn't).

Then he wrote to the official "Bicentennial editor" of The State Journal in Lansing. It was the best story I'd heard all year; so American.

Tog sent me a ton of documentation on everything he had accomplished to that point and the evidence was clear: The Lansing postmaster was plain wrong -- and mean-spirited to boot.

When I confronted her, she folded her arms and harumphed and said she wasn't going to "give" anybody such a philatelic treasure. The stamps were precious to Tog, all right -- not as a commercial venture, but as a family heirloom.

It was December by the time Tog's first letter had reached me. My story appeared Christmas week, 1976.

One reader took great interest. He was a postal worker who knew first-hand Tog's frustration of trying to deal with the inflexible postmaster and he was in a position to help.

Tog was so protective of his benefactor that it was two summers later before he told me the details, over dinner at the Tognazzini's.

That day, Tog had given me a two-hour personal tour of Hearst's magnificent castle, including some rooms (and hidden places) the public never sees.

But the real treat was Tog himself. I dined not only on delicious home-grown vegetables and fresh fish from one of their son's commercial boats, but also on the wisdom, charm and wit of this remarkable man.

I hadn't spoken or written to Tog in years. But he was genuinely delighted to get my call the other day.

He told me he still has all eight stamp sets since each of his children has asked him to hang onto them for safe keeping. They may have them anytime, Tog said, but perhaps they regard the stamps as a legacy.

He and Henrietta have been traveling, as usual, to Australia, England, New Zealand and all over the United States.  Back home, they play in bands -- he on piano; she on baritone sax.

"One of the most exciting things I'm doing grew out of playing music at a local convalescent home," said Tog. "Some of the people flattered me by saying how much they enjoyed my visits because I gave them a chance to talk about themselves.

"So I decided to start a program -- Reminiscing With Tog.' These people are a generation or so beyond me and it's fascinating to hear them talk of turn-of-the-century toys and home remedies and food -- what day-to-day life was like."

No fanfare, no fireworks, no slick speeches.